The Bhatner fort is at Hanumangarh in Rajasthan, India, about 419 km northwest of Jaipur along the old Multan-Delhi route and 230 km north-east of Bikaner. The old name of Hanumangarh was Bhatner, which means "fortress of the Bhatti Rajputs".Believed to be 1700 years old, it is considered to be one of the oldest forts of India.

The ancient fort situated on the bank of river ghaggar was built in 253AD by Bhupat, son of king Bhati of Jaisalmer. It is said that after losing the battle against the Sultan of Ghazni, King Bhupat took shelter in the jungle around the Ghaggar River. There he constructed a safe castle for himself which came to be known as Bhatner. The entire fort is built of bricks, covering an area of 52 bighas. It is in the shape of a parallelogram, with a dozen bastions on each side. Painted Grey Ware (circa 1100-800 BC) and Rang-Mahal Ware (1st-3rd century AD) have been found in wells situated along the wall.

In the middle of the thirteenth century AD, Sher Shah Suri (Sher Khan), a cousin or nephew of Balban (the sultan of Delhi), was governor in these parts of the country. He is said to have carried out repairs to the forts of Bhatinda and Bhatner.Sher khan's sepulture is still there in bhatner fort. In 1391, Bhatner was wrested by Timur by defeating bhati king Rao Doolchand. A mention has been made in "Tuzuk-e-Timuri"(Autobiography of Timur) about this fort and he stated this fort one of the strongest and secured fort of India.Even Mughal Emperor Akbar described his fortification in his book "Ain-I-Akbari".Subsequently the fort appears to have been held by Bhatis, Johiyas and Chayals until 1527 when it was taken by Rao Jet Singh of Bikaner. After that it came twice under Mughal control as well, in addition to being the possession of the royal families of Chayal and Bikaner. Researchers believe that famous Tarain war fought between Mohammad gouri and Prithviraj chauhan is the present Talwara Jheel area of the district. This fort stands in the path of invasion of India from Central Asia and had acted as a strong barricade against the attack of enemies. Finally in the year of 1805, it was captured by Emperor Soorat Singh of Bikaner and remained with it till the formation of Rajasthan.Since the day of victory was Tuesday (known as day of Hindu God Hanuman), so he named Bhatner as Hanumangarh 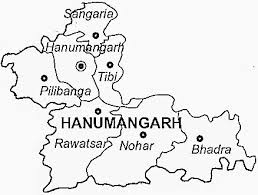